How To Dress for a Royal Wedding (or any wedding)

Where were you on Saturday morning? If, like me, you were sitting on the sofa in your pyjamas watching the royal wedding from the moment the coverage began, then this post will be a welcome second/third/fourth/fifth look at the proceedings. If not, then it won’t.

I loved it. From Oprah being one of the first to arrive, as if she was the least important person, prompting an immediate worry about how she was going to survive that many hours without food, to the Beckhams sparking a Twitter debate about whether they’d had a barney on the way – this was top notch entertainment. I was interested in what everyone wore naturally – my working life is currently 75% dressing women for weddings – but it was what Meghan showed up in that was the real reason behind my taking the iPad all around the house with me. But how differently it all played out; by the time I had seen that Meghan was in a boat neck number, I had seen so many beautiful, surprising outfits file into the chapel, I’d already peaked. 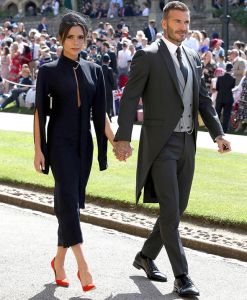 Amal Clooney timed her entrance to perfection. A ray of absolute sunshine on an already bright day, she was a willowy buttercup in a field of daisies and made George look like a rather third rate accessory to her Stella McCartney asymmetric midi, his role very much the supporting one. Arriving as they did just ahead of the Beckhams, it was almost like watching the long dark shadow of a cloud creep over the walkway as the spiky silhouette of Victoria tottered over – her orange stilettos the one pop of colour in her head to toe navy – her face set in misery (or agony, she did appear to have trouble walking), the flip side of Amal’s sunny side up. 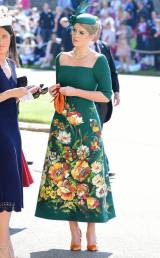 Posh wasn’t the only one who opted for a more wintery shade though, in fact there was something of a trend with forest green, berry and claret (is there a difference in those last two, who knows?) appearing as often as the baby blue and lemon, almost as if the guests had planned their oufits for crap weather. However the dress styles – midi again – saved the day because they were just so darned fabulous. I Googled which designer was responsible for Lady Kitty Spencer’s corseted flowery frock, possibly my favourite of all, but I should have guessed that Dolce and Gabbana were behind it. Chaste yet sexy is what they do best for the hourglass figure, once again an orange shoe turning up the heat. I can only hope that H&M or Zara act quickly to bring out a copy of this dress for autumn. 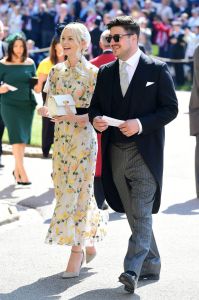 If Kitty Spencer represented the autumnal pallet then actress Carey Mulligan was championing the summer in every way. Her dress by Erdem was on the cusp of being a maxi, the delicate floral fabric gently twisted at the neckline and falling in ruffles to her ankles, nothing else needed but heels and a clutch. You could almost see Carey pulling this out at a later date to wear with flats and a cropped denim jacket for the school run. With her currently ash blonde hair and pale skin, she reminded me of a young Marilyn Monroe – absolutely gorgeous. James Blunt’s wife Sofia opted for a similar style, a column of flowers, this time in bolder colours. The only downside being it seemed to make JB look even shorter alongside, if you half closed your eyes they could be Tom Cruise and Nicole Kidman back in the day.

While there were many pretty prints on show, fitting in neatly with the carefully placed foliage around the chapel door, those who chose a block colour – mostly the older ladies for whom perhaps floral is historically too ‘mother of the bride’ – went for a pastel and the greens chosen by the Queen and the actual mother of the bride looked fresh and stylish. Meghan’s mum Doria Ragland was the epitomy of grace and sophistication in Oscar de la Renta mint from her pillbox hat to her pretty vintage style clutch. No huge brooches or daft ostrich hats for her; you could immediately see from where Meghan Markle gets her poise and understated elegance.

This wasn’t the red carpet, it was far more interesting with so many hats and fascinators and a level of anticipation not even the Oscars can evoke. The celebrities added excitement but the glamour was already there in spades, so I was all primed for Meghan’s former Suits cast mates to add the giggle factor, to get it completely wrong with some kind of Googled version of what one should wear to a British wedding. As my dad always said, a wedding isn’t a wedding until someone causes a bit of trouble. 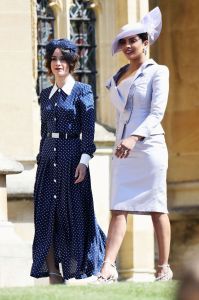 Sadly, it was not to be, not even Princess Charlotte mucked about. The Suits actors were show stopping, yes, but for all the right reasons. Contrasting styles and a masterclass in how to dress for your body shape – the Alessandra Rich governessy navy and white polka dot was another of my favourites.

We couldn’t have asked for more – perfect weather, stunning venue, a beautiful happy couple and the best dresses available brought together to mark the occasion. There’s only one thing left to say and it’s controversial so I’m going to say it and then leg it.

The new Duchess of Sussex in Stella McCartney

I preferred this one.