For me, 2014 started well. I saw the new year in wearing my new All Saints sequin mini dress, a gift from my boyfriend. Although we were only in eating takeaway and watching telly I kept noticing bits of bead and sequin that I had shed during the evening so I had to try not to move too much. I love that dress but it’s not the most practical piece and so I haven’t actually had the nerve to wear it out in public since. This year has followed the same theme – lots of sparkle with many practicalities to negotiate along the way.

Style wise, I think 2014 has been a rather classy one. There have been dubious trends of course – I’m still tutting about the summer ‘slides’ while this winter’s knitted trousers seem to have vanished from the rails and yet onto no-one in the whole of London that I have noticed. Perhaps the legs have been sent back to the suppliers and will be cut up to make snoods for autumn winter 2015. This year saw maxi skirts do big business while hats and long boots were all you needed to be bang up to speed; the 70’s look was nerve-wracking initially but once you realised you could channel Annie Hall rather than Rod Stewart, it was all rather comforting. After all, hats cover up crap hair and foreheads and boots cover up laddered tights and go with everything. I even bought a sensible lace-up pair by Steve Madden and my boyfriend commented that they were such a departure from my usual footwear, he found them almost cool. (From him, this is HUGE).

So as 2014 draws to a close, I would like to nominate those women who, for me, stood out for their sartorial choices. This is all fairly shallow, don’t expect to see any heads of state or Nobel peace prize winners in my list, I just like the clothes and the attitude. And actually you know, you can get a surprisingly long way on both those things when needed.

Lupita Nyong’o at the BAFTAs in March

This actress gave a masterclass in colour during award season and left many other more seasoned red carpet walkers in her wake. The only problem she has is keeping it up. Luckily her acting mettle is not to be underestimated either. Lupita is the one to watch.

Seventy in 2015, Helen Mirren goes from strength to strength and rarely puts a style foot out of place. I interviewed her once on the BAFTA red carpet and she looked impeccable; twinkly and yet completely natural. She knows what is best for her voluptuous figure and always chooses soft shades that flatter her skin tone.

I have never seen any of the Harry Potter films and so I come to Emma Watson without any pre-conceptions. Her UN speech on feminism meant for once here was an actress feted for her intelligence rather than her wardrobe. But hey, let’s give her a pat on the back for her wardrobe too since she always looks so darn chic. 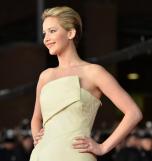 I love this girl. Does anyone not? She has fallen over at TWO awards ceremonies and you don’t get much more real than that. In a year where Jennifer has had more than enough of herself revealed, she has chopped off her long hair, had to deal with Gwyneth Paltrow in a love triangle type scenario (allegedly) and done most of it dressed in Dior. What’s not to love?

Gillian Anderson as Stella Gibson in The Fall

If you put Gillian Anderson into Google, the most popular search is ‘silk shirts’. Last weekend I spent at least ten minutes discussing said silk shirts with a friend’s mum who had recently unearthed her own silk collection form the attic as a direct result of the second series of The Fall. So yes, I know that Stella Gibson is a fictional character but she (with actress Gillian Anderson at the helm) will forever be credited with making blouses sexy again. And for making 46 a fabulous age to be for a woman.

A very Happy Christmas to all my readers, thank you for following and I look forward to seeing y’all in the new year.