Anyone Know A Good Taylor?

I’ve always been a fan of pop. I’m not even particularly discerning. When it comes to pop music, the more poppy and girly, the better. So it should come as no surprise that Madonna, Kylie Minogue, The Spice Girls and Katy Perry have all featured heavily on my playlists over the years and I’ll confess to being more than a little intrigued by the fashions these popstrels have treated us to in the process. I copied Madonna’s fingerless lace gloves and Kylie’s perm in the ’80s, Geri Halliwell’s platform boots in the ’90s and have shared in Katy Perry’s penchant for sequins any which way. Pop is fun, the fashions are frivolous and if there’s shock value built in for those who care to get their sensible knickers in a twist, then that’s a bonus. Personally, I’m really not bothered if Miley Cyrus wears clothes or not and if Madonna is still managing to get people’s backs up in her mid fifties, then good luck to her. I’m disappointed that her face now looks like that of a well fed toddler, but this is not a woman who gives a toss what anyone thinks about her style, so why should we?

However, whilst all this was going on and Madonna and Kylie were negotiating their way through their fifth and fourth decades in the music industry respectively, a teenage country singer was quietly gaining respect Stateside with not a wardrobe malfunction in sight. All cutesy apple pie blonde hair, blue eyes and long legs, this precocious singer-songwriter was unwittingly getting Kanye West’s back up by beating Beyonce to awards and bagging some of the hottest young bachelors  around. In fact I think it was when she briefly dated Jake Gyllenhaal that I really sat up and took notice of this young woman from Pennsylvania.

Taylor Swift is a multi-award winning artist who writes catchy songs about her own experiences and sells the albums they feature on by the bucketload. As if that wasn’t enough to be in awe of, she is regularly pictured leaving the gym immaculately dressed with small pooch under one arm and a genial smile on her face. You won’t see Taylor Swift looking flushed and knackered after a spinning session, oh no, this young lady is never knowingly undersold. I doubt we will ever see Taylor flashing her gusset as she gets out of a limo and by the same token she won’t ever be snapped shaving her head in public or attacking a photographer in the street. Sounds a bit boring doesn’t it? Not a bit of it. Taylor Swift is pretty, shiny, girly, and clean living and bar a rumoured feud with Katy Perry, she is so far, scandal free. And yet I love her! I love that she occasionally dresses unironically like Alicia Silverstone in Clueless and I love that her style is as likely to be copied by forty-somethings as pre-teens. It would seem that Taylor Swift is gaining fans in the most unlikely places since the release of her latest album ‘1989’ and it’s not just because she makes great pop music. After the uproar (yawn) about Miley and her twerking, isn’t it just so refreshing to see Taylor Swift simply looking gorgeous and clean cut and well, non-scary?

Taylor Swift at the Grammys in Gucci 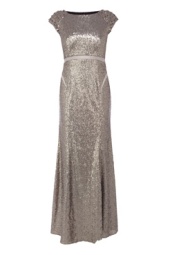 Dress reduced to £150 at Coast

I am almost old enough to be Taylor Swift’s mother and yet I would happily raid her wardrobe any day of the week. She just seems so darn talented and chirpy (although with that many break-ups she must have her moments) and even makes the odd feminist statement. Oh and my four year old son and I find it impossible to drive along to her latest single ‘Shake it Off’ without doing exactly that.

Yes, my name is Emily and I’m a Swiftie.

I help people refine their wardrobe to suit their shape, colouring and lifestyle. I am a style consultant, personal shopper and colour analyst working in London. Be the loveliest possible you. My first book SHOPPED was released on 5th July 2016 (September Publishing). www.emilystott.net
View all posts by aftercarrie →
This entry was posted in Uncategorized and tagged fashion, Katy Perry, Kylie, Madonna, Miley Cyrus, pop, shopping, Spice Girls, style, Taylor Swift, wardrobe. Bookmark the permalink.