Spend it Like Beckham: Posh with a hint of Spice

I am reading Fashion Babylon at the moment. It is a compulsive read largely because it is packed with industry gossip. No-one worth their Manolos is spared in this story of a London designer trying to hit the big time. From Kate Moss to Anna Wintour, the secrets as revealed to author Imogen Edwards-Jones by various ‘anonymous’ insiders, are occasionally seedy, always fascinating. It certainly takes the gloss off a business which relies heavily on appearing glossy. If you thought the life of a model was all freebies and dates with Leonardo di Caprio and Prince Harry, you’ll find this account very disappointing. Interestingly and thanks to the eight years that have passed since Fashion Babylon was published, the one celebrity whose public profile has risen beyond all recognition is Victoria Beckham. In 2006 VB was little more than a former pop star, a footballer’s wife and someone with very fake looking boobs which she wore up around her neck – this being pre-statement necklaces obviously. She wore designer clothes and hair extensions and hid away whenever pregnant so that her Pouting Lollipop public persona was carefully preserved. Accordingly, all mentions of her in the book reference her lack of style and the very long barge-pole with which no designer would touch her. She’s not quite hung out to dry with Coleen Rooney and Danniella Westbrook but she’s only one Burberry accessory away from the clothes line. 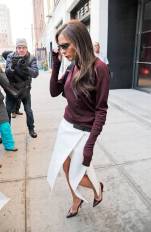 I must admit I’d kind of forgotten quite how naff Mrs Beckham aka Posh Spice had been back in the day, perhaps because I was quite fond of the Spice Girls and have always had an affinity with fashion victims who fail to see when they have stepped over the line from trendy to utterly ridiculous and/or inappropriate. It’s not as if she ever even had her ‘own’ high street collection like Coleen or Rhianna. No doubt about it, Victoria Beckham went from Fashion Roadkill with a nose ring and a pirate headscarf to Fashion Doyenne with her own catwalk show at New York Fashion Week (admittedly via the LA Galaxy pitch in a pink Roland Mouret dress, heels and a bleached ‘pob’) in less than five years and that, is extremely impressive. 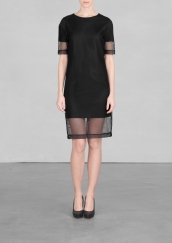 Victoria Beckham was the one who couldn’t sing in The Spice Girls. Now she is winning awards for her collections, dressing the likes of Cameron Diaz and being interviewed by British Vogue’s editor Alexandra Schulman. This is not someone to underestimate. Sure, the rumours abound about how much of the designing VB actually does – her Battersea office is close to where I work and recently I bumped into a former colleague who now supplies fabrics and meets with her ‘team’ regularly. When I innocently asked if Victoria chose all the fabrics herself he guffawed and told me not to be ridiculous, he’d never met her, why would she be there? He raised his eyebrows at me as if I’d asked if David Beckham made the tea and sewed on the buttons. 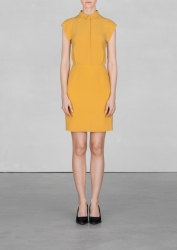 I don’t know how dirty Victoria gets her hands in the process of producing her fashion lines but she models them well. She is regularly pictured coming out of hotels in her own pieces and women far more clothes savvy for way longer than VB pay a vast amount of money to dress the same way.

& Other Stories dress reduced to £20

I’m not here to slate the woman; I covet her dresses every season and wore a pair of DVB jeans (highly flattering and leg lengthening) ’til they died a denimy death so I’m not really bothered if she is merely the face behind the brand. After all we buy into her husband advertising H&M pants which he almost certainly doesn’t design or even wear himself so why not let Posh Spice dictate our wardrobes. The price tags of the clothes are prohibitively expensive which naturally maintains exclusivity but take a closer look at what the high street is putting out there and you may detect a hint of Spice. It’s clearly what we really really want.*

* Sorry, couldn’t resist, it had to be done.

I help people refine their wardrobe to suit their shape, colouring and lifestyle. I am a style consultant, personal shopper and colour analyst working in London. Be the loveliest possible you. My first book SHOPPED was released on 5th July 2016 (September Publishing). www.emilystott.net
View all posts by aftercarrie →
This entry was posted in Uncategorized and tagged & other stories, clothes, David Beckham, design, dressing, fashion, shoes, shopping, Spice Girls, style, Victoria Beckham, wardrobe. Bookmark the permalink.