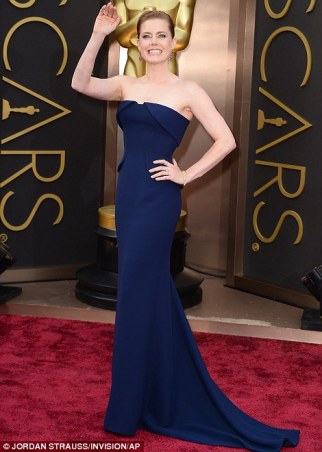 When I heard that the afternoon of the Academy Awards 2014 was unusually rain-soaked, I found myself feeling amused in a most uncharitable manner. Well, the rest of us are having to carry hats and umbrellas everywhere we go at the moment so why not the Oscar nominees too? I’d have liked to have seen some wellie styling or possibly even some of those umbrella hats that perch on your head leaving your hands free to pose. Sadly it was not to be and the beautiful and designer clad attendees put on an elegant and varied red carpet show without a hint of frizz or smudged mascara.

The first thing I noticed was the very palpable influence of the 1980s. Jennifer Lawrence (more of whom later), Julia Roberts and Amy Adams all wore, with varying success, column gowns with peplums while Kate Hudson and Matthew McConaughey’s wife Camila Alves sported enormous shoulder pads. Lawrence and Adams were among the best dressed of the night looking sophisticated and immaculate in red Dior and navy Gucci respectively.

Sandra Bullock also chose a strapless navy frock in a lovely flattering shape. The McQueen choice was by far the best she’s made so far this awards season. I loved Meryl Streep’s look, wearing softly draped white next to her face so much more flattering than black which was confined to the skirt. The person who surprised me with her fabulously fitted shell coloured art deco inspired dress was Lady Gaga. Designed by Versace, for once Gaga kept it subtle and feminine and it worked – who knew she could rock a vegetarian dress? 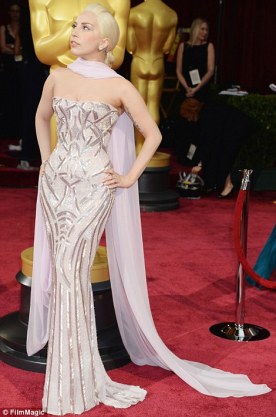 Cate Blanchett, victorious on the night for her performance in Woody Allen’s Blue Jasmine left the best dress for last looking ethereal in a pale embellished shimmering Armani number. I also loved Naomi Watts in her sparkly Calvin Klein; these Aussies rarely seem to get it wrong. Another older actress I thought was looking great was Laura Dern. Loved her dress, would wear it like a shot myself.

I was slightly disappointed by new star Lupita Nyong’o. She glowed and her pale blue Prada gown, reminiscent of the infamous billowing white pleated dress Marilyn Monroe wore in the Seven Year Itch, was glorious. However, the colour didn’t work as well on her as her previous red carpet outings and the deep V of the neckline served to highlight her very bony chest plate.

Angelina Jolie chose a metallic Elie Saab gown. Her hair and make-up was, as ever, perfect but the neckline was cut too high for her ample bosom and would have looked much better on someone built like Anne Hathaway or Kate Hudson.

Lastly (and then I promise I’ll stop with the styling advice) while someone like Charlize Theron should be able to work anything and everything, her striking black plunge neck Dior gown made her athletic shoulders look even wider. It wasn’t very flattering.

And so that’s it for the 2014 red carpet, it’s been colourful and a little more daring than usual and I’ve enjoyed every minute. Until last night I would have thought it impossible to love Jennifer Lawrence any more than I already do. And then she tripped over as she walked the red carpet. In Dior. FOR THE SECOND YEAR IN A ROW. You couldn’t make it up.

I help people refine their wardrobe to suit their shape, colouring and lifestyle. I am a style consultant, personal shopper and colour analyst working in London. Be the loveliest possible you. My first book SHOPPED was released on 5th July 2016 (September Publishing). www.emilystott.net
View all posts by aftercarrie →
This entry was posted in Uncategorized and tagged best dressed, dresses, eighties, fashion, Oscars, style. Bookmark the permalink.